Dindigul city is also known as Lock City. Dindigul is a city and district headquatres in south indian state Tamil Nadu. Dindigul has a number of historical moments. The Rock Fort being the prominent.

The district at large has two industrial estates with one of them located in the city for many lock manufacturing units.

Dindigul is also known as "LOCK CITY". The lock manufacturing units provide jobs and livelyhood to many families spread all over the district. Headmade Dindigul Locks has reputed brand image and hence it has a huge demand in local and international markets.

The Lock manufacturing industry in Dindigul is more than 500 years old and spread over places in the district. They can guarantee aspects like quality, full safety & key facilities, most importantly they are attractive and unique in design.

Dindigul lock manufactures claim that the precision lever mechanism in their locks is manualy assembled with unique key code and shackles are meticilous in design that gives greater resistance to anyone who tries to break in. Though there are plenty of locks available in the indian market, yet people give first preference for reputed Traditional Dindigul Locks. 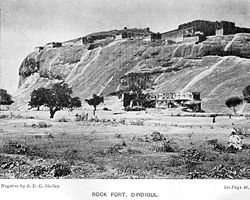 The Dindigul Fort or Dindigul Malai Kottai is a 17th-century hill fort, built by Madurai Nayak situated in the town of Dindigul in the state of Tamil Nadu in India.

Dindigul has a number of historical monuments, the Rock Fort being the most prominent.

Dindigul is believed to be an ancient settlement; it has been ruled at different times by the Early Pandyan Kingdom, the Medieval Cholas, Pallava dynasty, the later Pandyas, the Madurai Sultanate, the Dindigul Sultanates, the Vijayanagara Empire, the Madurai Nayak Dynasty, Chanda Sahib, the Carnatic kingdom and the British.

The fort was built by the Madurai Nayak king Muthu Krishnappa Nayak in 1605. In the 18th century the fort passed on to Kingdom of Mysore (Mysore Wodeyars).

During the reign of Hyder Ali and Tipu Sultan the fort was of strategic importance. In 1799 it went to the control of the British East India Company during the Polygar Wars.

There is an abandoned temple on its peak apart from few cannons sealed with balls inside. In modern times, the fort is maintained by the Archaeological Survey of India and is open to tourists.